There are several reasons you might want to stock up on oat milk and freeze it for later use, whether it’s due to current low prices or bulk deals. Or perhaps you’re making your own batch of homemade oat milk that you want to freeze for later.

So, can you freeze oat milk?

The good news is that you can definitely freeze oat milk and thaw it out for later use. Keep in mind that doing so may compromise the milk’s integrity, like its texture, but it’s perfectly safe to consume.

Keep reading to learn about the best and safest ways to freeze both homemade and store bought oat milk. You’ll also explore the different benefits of drinking oat milk along the way.

What is Oat Milk?

Oat milk is a plant-based dairy milk alternative that has become somewhat of a fad over the past several years. Like almond milk, cashew milk, or soy milk, it offers a convenient option for those who still want milk in their plant-based and/or lactose-free diets.

Furthermore, it offers a tolerable alternative to nut milks for those who have anaphylactic nut allergies and gluten-intolerant individuals.

Oat milk comes from extracting plant material from whole oat grains (groats) or steel-cut oats by using water. While it’s not quite the same as cow’s milk, it does maintain a creamy texture. Varieties can be sweetened, unsweetened, flavored, or unflavored.

You’ll sometimes find oat milk offered in chocolate or vanilla varieties, which are favorites among vegan latte drinkers. Oat milk products also vary in accordance with their fat, sugar, and carb content per serving. Therefore, some brands and products are healthier than others.

The result is a smoother liquid, pulp matter removed, that retains some of the nutritional value of the grain. Ideally, a quality oat milk should have a decent amount of soluble fiber and protein content per serving.

It doesn’t have the same nutritional benefits that cow’s milk does, but it does provide some essential nutrients. Luckily, oat milk is also calcium-rich and Vitamin D-rich, which helps in its comparison to dairy.

How is Oat Milk Made?

As previously mentioned, oat milk is extracted from the grains/oats, and the pulp is left behind. But how exactly is this dairy alternative made and processed? As it turns out, there’s a little more to the process than just soaking the oats in water. It involves specific steps to isolate the liquid without compromising the nutritional content.

First, the oats are soaked in water. Once this step is complete, there is a process of grinding/blending down the mixture until it maintains a finer (more drinkable) consistency. Once the blending process is complete, the liquid gets strained so that it contains minimal particulates.

In factories, this process is pretty automated. But for homemade oat milk, you can use a cheesecloth or traditional fine strainer to parse out the milk.

The reason that oat milk still tastes oat-ey is that the finer particles you can’t see retain the flavor. These tiny particles are also the source of nutrients, like fiber and protein, in oat milk.

And to further liquify oat milk, enzymes are sometimes added in order to break down the starch content. It also gets heat-treated in factories in order to preserve it for longer. This is why homemade oat milk doesn’t last quite as long as factory-made products.

The final touch is when you add sweeteners and flavors to oat milk, which is of course optional. Based on your preference, you could add artificial sweeteners, natural sweeteners (like Stevia), and different flavors to customize your milk.

Can You Freeze Oat Milk?

You can absolutely freeze oat milk and thaw it out to drink later. Whether you want to save a homemade batch that you can’t use all at once, or you bought extra, it’s simple. The key, however, is to do so the right way, which you’ll learn in a moment.

As with any perishable food/beverage that you freeze, you have to do so at the right time for safety. Comparatively, oat milk spoils a lot slower than traditional cow’s milk. However, you still have to be wary of bacterial contamination and other food safety practices.

Furthermore, you have to keep in mind that freezing oat milk and thawing it out later will change its consistency. The most common noticeable changes are textural changes, where the thawed oat milk becomes somewhat grainy. The upside?

Just as you can strain the grain out of oat milk when you’re making it, you can do the same after thawing it. Now, this might further remove some of the nutrients from the milk, such as fiber. However, it’s a valid and relatively simple option if you prefer smoother, pulp-free oat milk.

We’ll give more detail for this process later on, but first, let’s explore the different ways to freeze oat milk.

Depending on whether or not your oat milk is store bought or homemade, the freezing process will differ. Store-bought oat milk often gets preserved/treated to make its shelf-life longer than that of homemade oat milk. You should also note that you shouldn’t refreeze oat milk after the initial freezing. Next, we’ll take a look at the differences between these methods.

Store-bought oat milk is going to last longer when frozen than homemade oat milk will as noted above.

Oat milk can last about three months in a freezer. However, if you’re placing an unopened, store-bought carton in the freezer, you can extend its life up to six months.

But maybe you’ve already cracked the seal on your store bought oat milk. Don’t worry, as you can still safely freeze it by pouring it into an airtight, freezer-safe container. Keep in mind that it will expand some while freezing, so leave some empty space in the container. If you’re afraid you’ll forget, mark the date of freezing on the container to reference later.

Therefore, if you’re freezing homemade batches, you should do so ASAP after making it and before five days are up. Freezing homemade oat milk follows the same process as store bought oat milk.

Use an airtight, freezer-safe container, label the date, and don’t leave it frozen for more than 3 months.

How to Thaw Oat Milk

Now that you know how to properly freeze homemade and store bought oat milk, let’s learn how to thaw frozen oat milk. We mentioned earlier that oat milk becomes grainy once thawed. The reason for this is that particulates naturally settle and separate when freezing.

Oat milk can spoil after removing it from months in the freezer. So you need to keep it chilled the whole time it’s thawing. Similar to thawing meats, you should move frozen oat milk directly to the refrigerator to begin the thawing process. (Don’t let it sit at room temperature, as this runs the risk of bacterial growth and spoiling.)

Give the oat milk at least eight hours to thaw, or just let it thaw overnight to save you the waiting time. If you’re thawing store bought oat milk, you can use it for up to 10 days after thawing. If it’s homemade, though, try to use it ASAP and not more than five days later.

Once your oat milk is thawed, you can fix the graininess issue by straining the thawed oat milk again. Nut milk bags and cheesecloths are the most effective, but for a more affordable option, just use a fine strainer.

Finally, there are many great health benefits, as well as environmental and financial benefits to choosing oat milk.

The first thing you should note is that oat milk has similar health benefits when compared to dairy. Although it often has more sugar than nut milks, it generally has a higher Vitamin D content than cow’s milk. Oat milk compares to cow’s milk in calcium content, and it slightly exceeds other plant-based milks in protein and fiber content.

Last but not least, oat milk is relatively affordable, but the kicker is that it’s super cheap to make homemade. All you need is oats, water, a blender, and a straining device to make it at home.

It’s easy to freeze and thaw oat milk if you want to extend its shelf life or save your leftovers. Note that homemade oat milk won’t last as long as store bought oat milk in the freezer. Make sure to use an airtight container for freezing and safely thaw in the fridge. Enjoy your oat milk!

« How to Reheat Oatmeal? 3 Simple Methods
Where Do Oats Come From? » 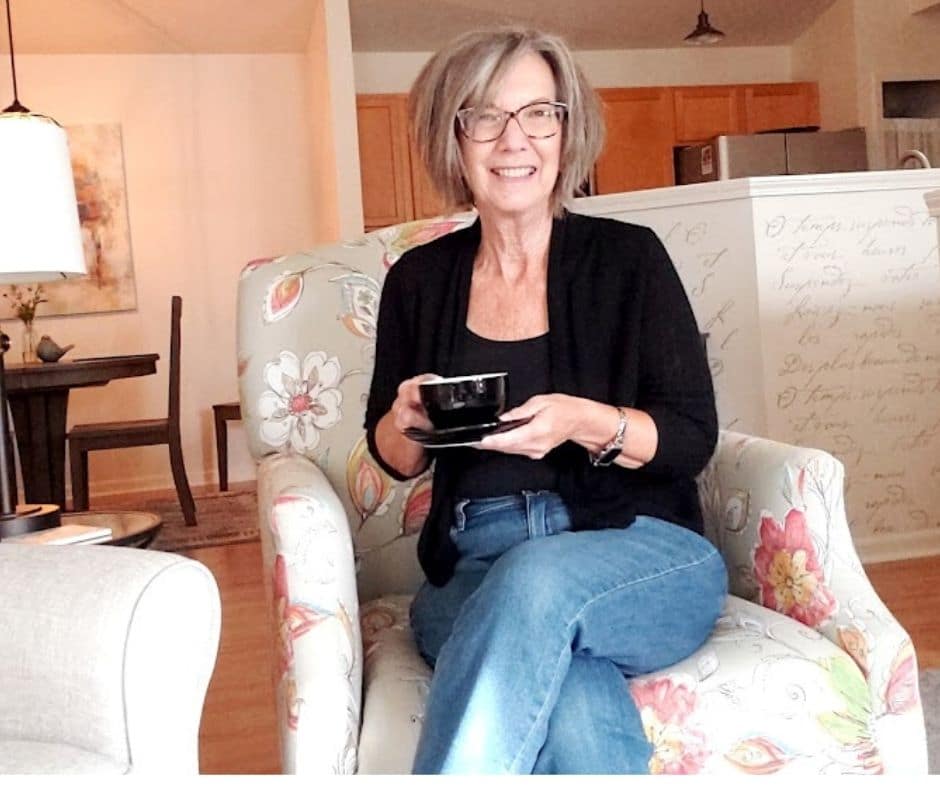 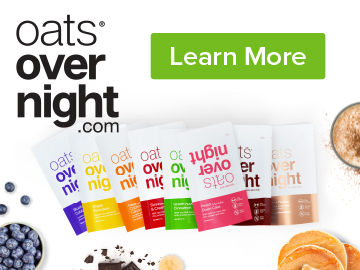 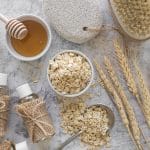 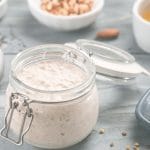 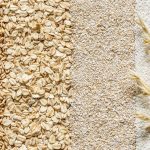 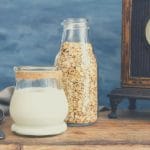